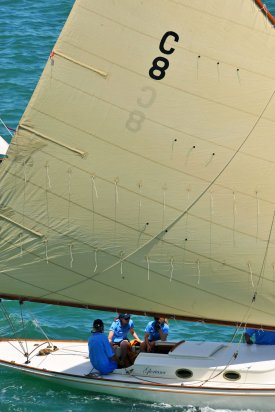 The Classic Yacht Gloriana was launched on 14th November 1892. She was the first boat built by the fledgling Logan brothers firm R & A Logan. A  2 ½ rater she was built by Robert Logan Junior and his brothers Arch and John in their spare time to be campaigned themselves. The Logan's were shifting their thinking from the scottish Fyfe designs to the designs of the hugely successful designs of the American Hereshoff. She was a 1/2 scale version of the great Nathaneal Hereshoff designed Gloriana, the New York Yacht Club 46ft class champion of 1891, but incorporated all the thinking of the new Logan firm.

Upon her 1892 launching Gloriana was an immediate success, blitzing everything else on the harbour and helping establish the Logan brothers reputation in wooden boat construction.

Gloriana was shipped to Wellington on the Talune in January 1894 for the Wellington Anniversary Regatta Second Class event which she won. She started the race only minutes after being put in the water from the steamer. Gloriana was then immediately shipped back to Auckland in time to achieve the class win in the Auckland Anniversary Regatta. The racing and logistics success was a major further boost for their business and their order books were full as rival builders were inspired to build a number of would be Gloriana beaters.

The yacht’s story is covered in the Robin Elliott and Harold Kidd’s book The Logan’s which states, “The boat was an absolute cracker, the platform for the later success of Logan Brothers as New Zealand’s premier yacht builders. From that perspective she is a vitally important boat and must be preserved.”

Little is known of Glorianas ownership history, however she was owned by John Gordon McKenzie from 1962 to 1964. John was in touch with the Classic Yacht Charitable Trust in June 2015 and recounted some of his experiences. Thomas Wilding was in touch with the Trust in February 2020 to provide a little further information from his father (Ken Wilding) and grandfather (Thomas Charles Wilding) owning Gloriana from 1950s to 1962.

The wooden boats purist Captain Jim Cottier owned Gloriana for 22 years. Cottier was a hugely experienced sailing master who for many years was captain of the tall ship Soren Larsen. He also skippered the brigantine Breeze in the peace flotilla to Mururoa atoll in the wake of the 1985 French bombing and sinking of the Greenpeace protest vessel the Rainbow Warrior. While he owned her, Cottier returned the yacht to its original gaff rig and style, as over the years she had been converted to sloop rig and had a dog-house added that totally destroyed the classic Logan line.

When Cottier put Gloriana up for sale Bill McCarthy spotted her in the Classic Yacht Association magazine and was immediately inspired to ensure her ongoing preservation, having previously first noticed her in 2000 during a visit Roberton Island in the Bay of Islands. At that stage she was looking a little forlorn with no rig. Bill contacted long term friend John Street who, recognising her importance to NZ's boat building and yacht racing history, jumped at the idea to acquire and preserve her for the long term. John was already in the process of establishing the Classic Yacht Charitable Trust and Gloriana was the first vessel moved into the trust once it was incorporated in 2003.

The journey from the Bay of Islands to Auckland was a challenging experience for the delivery crew of Paul Johnston and Grant blewett. Making overnight stops at Tutukaka and Kawau Island before the final leg to Auckland which started out in a moderate breeze but ended in a 40 knot blow by the time they reached the Rangitoto channel in the Waitemata harbour. The bow sprit was ripped off in a gust which further challenged the very able crew to successfully nurse her safely through the final leg of their journey to her new berth at the NZ Maritime Museum.

Gloriana was given a complete restoration at the same time as Thelma at Wayne Olsen’s Horizon Boats Ltd shed in Silverdale. She was re-launched with Thelma at the Viaduct Basin in time for the 2008 summer season. She is maintained as an on water permanent display by the Classic Yacht Charitable Trust for the New Zealand Maritime Museum.