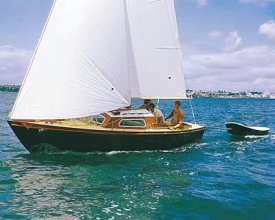 Following her restoration Bandit has been gifted to the New Zealand Maritime Museum by the Classic Yacht Charitable Trust and can be viewed in the "Blue Water Black Magic" area of the museum.

In 1966 at the age of 17 Sir Peter Blake, with some help from his brother Tony and good friend Crawford Duncan, built his first keel yacht called Bandit in the back yard of their family home in Bayswater. Much experiential learning occured along the way including having the bath tub, in which the lead for the keel was heated, splitting and pouring the molten lead all over the lawn. Bandit was launched at Devonport on the 21st of January 1968. They did try to launch her on the 20th but all the "getting things right" meant the tide had dropped and the cable on the Devonport Yacht Club slip way wasn't long enough for Bandit to float free of the cradle, so up she came with a wet bottom but not yet free. That summer was spent sailing Bandit around the Hauraki Gulf. The guard rails went on in the winter for the 1968-69 racing season. Peter, Tony and Crawford won the New Zealand Junior Offshore Group Championship in the 1968-69 season.

Bandit was often the smallest boat in the offshore racing fleets and Tony recalls one race in winds of 30-35 knots. The first leg was on the wind and Bandit was feeling its lack of waterline, slogging away at the back of the fleet. But at last they reached the turning mark and headed off downwind. Lessons learned from those wild rides across the harbour on their Z-class dinghies were put to good use as they popped the orange and black spinnaker and surfed through the fleet. Tony: "By the time we reached the next mark, we were two miles ahead of the nearest boat. It was pretty wild in big seas, but we must have averaged something like 15 knots on that leg."

Bandit was acquired by Viv Wyatt of Warkworth from his accountant who received the vessel as part payment for an account. Viv: "from memory I paid the haul out fees, several months hard stand fees and a case of wine".

Viv gifted Bandit to the Classic Yacht Charitable Trust in May 2013 with a nominal transaction cost of 20cents to complete the transfer. She is in sound condition having been stored in Viv's shed for 14 years where Viv and his son carried out some repairs to her. The vessel was moved on 1st May 2013 to Horizon Boats Ltd in Stillwater, before being moved to Yachting Developments Ltd in Hobsonville, where she sat for some years awaiting funding to complete the restoration.

Past friends and associates of Peter made some donations toward the restoration, with the major contribution coming from the generous arrangement between Bruce Tantrum and super yacht builder Ian Cook of Yachting Developments Ltd, exchanging model yachts crafted by Bruce for restoration work completed by Ian. Bandit is now fully restored. She was donated to the New Zealand Maritime Museum in June 2018 where she was officially unveiled on 30th Jan 2019 and is now on display beside the Americas cup winning boat NZL32 as part of the Sir Peter Blake story.

Tony Blake is a world reknowned historical and modern marine artist (http://www.adblake.com/). He has recently completed a historically accurate oil painting of Bandit which he describes as follows:

"racing towards Channel Island in one of the JOG races- late afternoon. I can remember "hanging ten " up at the bow as Crawford ( crew with myself and Peter) and I took down the kite next to Channel Island in breaking seas. We were planing flat out at around 15 knots at times on the run out from Canoe Rock off Kawau- and leading the fleet- all larger boats than "Bandit". Peter is on the helm, I have the kite sheet next to Peter and Crawford reaching to winch kite sheet in a bit. We finished at 3am in the morning at Matiatia Bay Waiheke- some of the larger yachts overtook us on the beat back but we won on handicap"