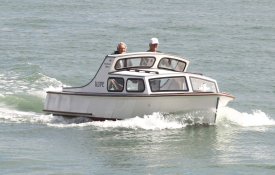 Kupe was sold in 2016 to Martin Robinson uses her to ply the Mahurangi river to Warkworth and continues to maintain her in her original condition. She is no longer a part of the Classic Yacht Charitable Trust.

Kupe was built for use as a cartography and routine sounding vessel in 1962 for the Auckland Harbour Board at an estimated cost of 760 pounds from the capital works budget of the AHB. In that era AHB was responsible for all shipping matters in the Waitemata and Manukau harbours. Kupe's responsibilities included routine maintenance roles such as repair to channel markers as well as surveying depths in the Manukau and Waitemata harbours and was regularly trucked across the Auckland isthmus to carry out this work for nearly 20 years. Kupe was originally powered by a Ford 315 Consul marinised petrol engine and didn't perform well due to the direct drive gearbox restricting maximum revs being achieved. A bigger prop and a 2:1 reduction box added two years later improved performance considerably to a credible 10 knots with three passengers. In 1969 the Ford engine was replaced with a four cylinder Perkins 4/107 diesel engine.

Kupe was used on project work from time to time including the building of Fergusson Wharf and charter work from 1968-69 to the Japanese company building the Auckland harbour bridge. In 1981 Kupe was replaced by a fibreglass trailer boat that was easier to transfer between the harbours and required less maintenance. After a refit she was transferred to the then AHB owned Westhaven Marina where she was involved in daily inspections, towing, depth surveys and general maintenance work.

Despite being very stable and capable of towing vessels of up to 20m by 2007 Kupe's role was increasingly being taken over by plastic R.I.Bs. The Harbour Board commissioned a full refit of the vessel at this time.

Simon Ventura, a trained cabinet maker with previous boat fitout and restoration experience, carried out this restoration work. Due to six buckets of salt water and diesel sludge in the bilge Kupe had no rot in the hull but the decks were in poor conditions. Ventura removed these and replaced a couple of deck beams before relaying the decks in laminated plywood then fibreglass coating. The cabin shape and cabin top were left as original, but timber fillers were added to soften the curves of the coamings. The original entry to the cabin was awkward to negotiate and entailed stepping over the spinning propeller shaft. Ventura shifted the steering position to the middle allowing cabin access either side of the helm. The interior cabin furniture was all rebuilt, new windows were fitted and all fittings and grabrails cleaned up and reinstalled. The interior and exterior were coated with single pot paints.

Her current engine is a three Cylinder Lister Petter which delivers 30hp at 3000 revs and a stately 5 to 6 knots,  all that was required at Westhaven Marina.

John MacFarlane of boating NZ wrote a comprehensive article in the December 2008 Boating NZ magazine on the history and restoration of Kupe.

Kupe was sold to the Classic Yacht Charitable Trust in April 2013 having fulfilled her needs at Westhaven.