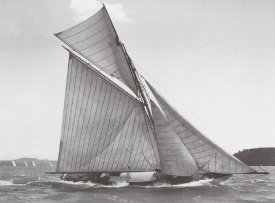 Kotiri was transferred to wooden boat builder Peter Brookes in December 2015. Peter has restored many vessels over the years and plans to restore Kotiri as his own vessel in his spare time.

The classic yacht Kotiri was designed and built by Logan Brothers in 1897 (launched 18th October 1897) at the height of the boat design and racing rivalry period between the Logans and the Bailey Brothers. The Baileys launched Meteor in the same month, both boats being built to the 30ft linear rating of the time.

Kotiri passed through many owners, including a period in Wellington, where she was renamed Kotiri II to differentiate from a smaller 30 footer of the same name. She was owned for a time by Laurence "Bruce" McCallum, the son of R H McCallum of Marine Parade Devonport who owned the family business Winate and Co based in lower Queen Street opposite the Central Post Office. Bruce MCCallum died in a bomber crash over Belgium on a mission to Cologne in 1943. The McCallum's won the Devonport Yacht Club's Duder cup in 1941 & 1942. The trophy is still held by a family member Tom McCallum of Pakuranga. Tom is also caretaker for another small trophy inscribed "RNZYS Kotiri 1939".

Kotiri was purchased by Blair Daniel Webster in 1947 who converted her to marconi rig c1949. She was still sailing in 1952 but Blair layed her up in his boat shed at at 75 Sarsfield St Herne Bay in 1953 as her decks were leaking badly. In 1961 Blair commissioned R L (Bob) Stewart to draw up plans for conversion to a K class. From 1962 to 1968 Blair, with his closest friend J S G (Jock) McLanachan and a boat builder Jim Dennerley of Coxes Creek, worked on the conversion by increasing the height of the freeboard by 3 planks (approx. 9 inches); fully rib her; add new Bob Stewart "Patiki" style coamings; cut off rotten counter stern and build tuck. Boat shed ramp and railway tracks were laid for her ultimate return to the water. In November 1968 Kotiri was relaunched and moored on pile moorings at Westhaven. A second masthead rig and used sails were subsequently purchased. The boat shed at Herne Bay was regularly used for cleaning and antifouling haulouts. Kotiri sailed on rare occasions over the following years. Circa 1985 she sailed in a Classic Yacht regatta and by the late 80's she had "retired" to the boat shed.

Blair Webster passed away on the 16th August 2000 and left Kotiri to his eldest son Donald. After 66 years ownership in the Webster family Kotiri was gifted to the Classic Yacht Charitable Trust on 14th March 2013 by Donald Webster. The token sum of 20 cents passed hands, for which 10 cents "change" was given, to mark the change of ownership.

Having been stored in a sound shed, over water, with good airflow, her hull was preserved in exceptionaly good order.

The Classic Yacht Charitable Trust are looking to raise funds to restore Kotiri to original sailing condition and preserve her for the long term enjoyment of New Zealanders.