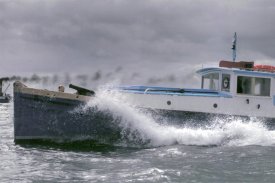 Te Hauraki was sold in January 2016 to Roger Moore and is no longer a part of the Classic Yacht Charitable Trust fleet.

Apart from the observation that she is the most beautiful motor launch on the harbour, people may wonder why Te Hauraki is part of The Classic Yacht Charitable Trust Fleet.

It quickly became apparent to the trustees that the chance of damaging a classic yacht and personal injury is more likely than with modern vessels. Taking its responsibilities seriously, the Trust envisaged a tender vessel carrying all types of safety and emergency equipment, including, communication, flotation, and fire fighting devices, and also tow lines and first aid gear. This was vital not only for its own fleet but for owners of all classic yachts taking part in the various classic yacht races held almost every second weekend throughout the year. Experienced volunteers who still have an interest in sailing but through circumstance no longer wish to actively be involved in yachting man Te Hauraki.

There is no better vessel to act as tender and guardian of the fleet. Te Hauraki was built by the Auckland Harbour Board in 1920 and is typical of the workboats of the era. At the time of her launching Te Hauraki was the biggest and most powerful boat in the Auckland Harbour Board launch fleet. After being sold out of the fleet Te Hauraki languished on the beach at Little Shoal Bay for some time. She was then bought by towboat skipper Lance Cross who refloated her and towed the 40’ boat to his parents’ property at Herald Island behind a 12’ clinker dinghy powered by a 4hp Seagull outboard!

The Trust found Te Hauraki at Te Kopuru on the Kaipara Harbour  in amazing condition and largely unchanged from her original state but fitted with a 260hp Cummins diesel that can push her at 14.5 knots!

Te Hauraki required a major engine overhaul in the 2009-10 summer. While the engine was being rebuilt her hull was given an extensive restoration. She was re-launched  in late 2010.